Authors: T Chestnut
November 03, 2014
The amphibian chytrid fungus is an aquatic fungus implicated as a contributor to amphibian declines worldwide. Most research has focused on the dynamics of the pathogen in its amphibian hosts, with little emphasis on the ecology of the fungus in the environment. Therefore, we investigated patterns of amphibian chytrid fungus occupancy and density in amphibian habitats using occupancy models, powerful tools for estimating site occupancy and detection probability. This study provided evidence that the fungus occurs in the environment year-round, and its density varies seasonally. We detected the amphibian chytrid fungus in 47% of sites sampled, but estimated that it occupied 61% of sites, highlighting the importance of accounting for imperfect detection. When the amphibian chytrid fungus was present, there was a 95% chance of detecting it with four samples of 600 ml of water or five samples of 60 mL. Our findings provide important baseline information to advance the study of Bd disease ecology, and advance our understanding of amphibian exposure to free-living Bd in aquatic habitats over time.

For more coverage from Environmental Monitor, follow the jump: www.fondriest.com/news/new-amphibian-chytrid-fungus-tests-ease-search-wide-ranging-frog-disease.htm 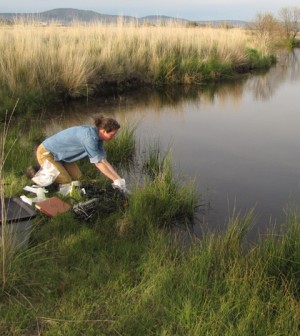