Authors: Evan HC Grant
April 13, 2011
In many national parks, high-elevation biota are severely threatened by climate change. An assessment of the impacts of climate change is required for efficient spending of funds, proper management of rare and endangered species, and effective conservation of National Park Service biological resources. The decision facing National Park Service managers is to choose among management actions which may mitigate the potential negative effects of climate change. Resource managers at Shenandoah National Park (SHEN) need to develop a management plan and evaluate ongoing management actions with respect to P. shenandoah which anticipates the effects of climate change on the species, includes a desire to limit active management, and is sensitive to other aspects of the high-elevation ecosystem. Our ultimate goal is to develop an iterative state-based decision process, based on information from a monitoring program designed to inform decision makers on the distribution of P. shenandoah. We developed a rapid prototype of the decision during a one-week workshop at the National Conservation Training Center, which included participants from the National Park Service, Fish and Wildlife Service, University of Virginia, US Geological Survey and ARMI researchers.

The federally endangered salamander P. shenandoah is found nowhere else on earth except within the boundaries of Shenandoah National Park, and its entire known range consists of approximately 6 square kilometers of high elevation (>900m) forested habitat, distributed across three mountain peaks. It is believed that P. shenandoah has become restricted by competition with the red backed salamander (Plethodon cinereus), which is believed to have expanded from the lowlands with a changing climate since the Pleistocene. P. shenandoah s presence is strongly influenced by elevation and aspect, presumably in relation to temperature and moisture gradients and associated central and southern Appalachian high elevation forest types.
Both temperature and humidity are expected to change in the Mid-Atlantic in the next few decades but the uncertainty among global climate models is large (Polsky et al., 2000). Global climate models generally predict warmer and wetter conditions in the Mid-Atlantic region with an increase in average temperature ranging from 1 to 5 C over the next 10 to 100 years (Hawkins et al., 2011). There is considerable uncertainty in downscaling global climate models to areas in complex mountainous terrain, and these projections need to be refined for the Shenandoah National Park.
We applied a formal, structured process for decision making, which can be summarized as comprised of 5 interrelated parts, addressed in succession, and driven by a focus on values-based objectives. Our objectives include ecological (e.g., P. shenandoah persistence) and procedural (e.g., adhere to park policy) objectives, which we treat as fundamental desires which must be considered simultaneously. For the rapid prototype, we considered four fundamental objectives:

To link the objectives with a suite of potential management actions identified during the workshop, we are incorporating down-scaled climate data directly into models predicting P. shendandoah occupancy. This will enable us to provide an explicit link between habitat conditions, P. shenandoah and P. cinereus occupancy, and changes in the species’ distributions under future climate scenarios. The resulting model can then be used for assessing population viability under future climate scenarios, considering varying levels of environmental variation, environmental autocorrelation, and competition with P. cinereus. It will also be used to investigate the effects of different management actions and various intensities of these actions on the population persistence of P. shenandoah.

Uncertainty is present in all aspects of this decision problem. The ecology of the species and the expectation of future climate conditions under climate change were two major sources of uncertainty identified during the workshop. The relationship between P. Shenandoah occupancy and persistence, and the effects each management alternative on the persistence of P. shenandoah were identified during the workshop.

We plan to address uncertainty in four ways: first, we are designing a set of experiments which will elucidate the ecology of P. shenandoah, particularly with respect to our expectation about how climate variables (temperature and humidity) may influence competition with P. cinereus. Second, we will combine field observations of temperature and humidity to calibrate downscaled climate models, which will provide site-specific estimates of future climate conditions under a range of likely climate scenarios. Third, we plan to develop a population viability analysis to reduce the uncertainty about the relationship between occupancy and persistence. Finally, we will conduct additional surveys outside of the known distribution, to determine the true range limits of the species. Reducing these uncertainties will help inform the effect that the alternative management actions may have on P. shenandoah occupancy. 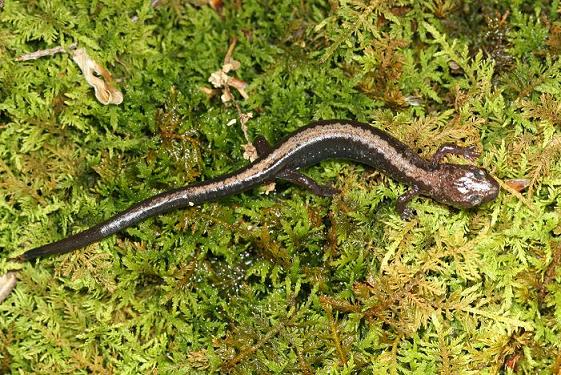 The endangered Shenandoah salamander (Plethodon shenandoah)is restricted to three mountain peaks in Shenandoah National Park. Climate change forecasts for these areas suggest that active management may be necessary for persistence of the species.
Photo by: J Sevin