Authors: B Landis
April 18, 2011
With Easter around the corner, Southern California biologists are playing bunny and hiding some 300 eggs in the wild.

But these are tiny, gelatinous eggs that belong to Rana muscosa -- the mountain yellow-legged frog (also know as the Sierra Madre yellow-legged frog). And biologists are hiding these eggs in a chilly stream in the James San Jacinto Mountains Reserve near Idyllwild, California, in an ongoing, collaborative effort to preserve this endangered amphibian.

On April 14, researchers from USGS and the San Diego Zoo will release these eggs, which were laid by captive frogs at a zoo laboratory 90 miles away. This field expedition is part of a larger USGS-led partnership to study the Southern California population of the mountain yellow-legged frog, which is federally listed as endangered with only 200 adult frogs remaining in the wild.

USGS Western Ecological Research Center biologists Adam Backlin and Liz Gallegos lead the annual population monitoring and captures of the frogs, while the San Diego Zoo, Los Angeles Zoo and Fresno Chaffee Zoo manage captive breeding programs. The U.S. Fish and Wildlife Service and California Department of Fish and Game are responsible for the frog's management and recovery, and the University of California Reserve System protects some of their new stream homes.

"We're hoping that we also see some maturing frogs from last year's batch of released tadpoles, when we head out to release the eggs on Thursday," says Backlin, who has been preparing the eggs' new home in the 50-degrees-cold stream waters.

The eggs will be placed in a cage made of window screening, and should hatch out tadpoles over the coming weeks. The cage also helps researchers count how many tadpoles actually hatched, and protect them for a little while before they are released to their freedom -- hopefully to survive nature's hazards and grow into adult frogs that help repopulate this dwindling species.

"Researchers and managers know that the San Jacinto Reserve once had a yellow-legged frog population in the mid-1990's," says Backlin, who is based in Irvine. "This particular area is already protected land, closed off from human activities and is easy for us researchers to hike to and monitor. So it seemed a safe location to pick for a reintroduction effort."

Southern California mountain yellow-legged frogs are now only found in the San Gabriel, San Bernardino and San Jacinto mountains. A group of San Gabriels frogs were rescued after the 2009 Station Fire, and those are currently being cared for at the Fresno Chaffee Zoo.

Meanwhile, the Los Angeles Zoo also has a group of San Jacinto frogs, whose latest batch of 500 eggs will be hatched into tadpoles in preparation for a June release.

This project is one of many efforts under the USGS Amphibian Research and Monitoring Initiative, which was chartered by congressional mandate to study the troubling amphibian declines in the U.S. and around the world. 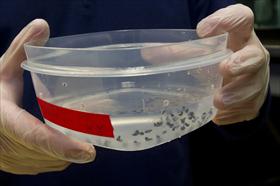 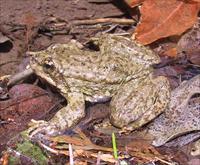 An adult mountain yellow-legged frog
Photo by: Backlin A