Authors: A L Gallant; W J Sadinski; Mark F Roth; C Rewa
June 23, 2011
Humans change the landscape to obtain food, fiber, and energy. This process of change occurs parcel by parcel, landowner by landowner, but often sums to extensive regions of change. Humans have altered the landscapes throughout much of the midwestern United States significantly since EuroAmerican settlement. Nowhere have landscape and habitat changes been more dramatic than in Iowa.

A look at historical landscape conditions in Iowa can provide important background for understanding where amphibians and other species can live there today. We performed such a retrospective analysis to help us assess the environmental benefits from conservation programs supported by the U.S. Department of Agriculture. Our results illustrate widespread landscape and habitat changes in Iowa, including a statewide homogenization of formerly more diverse regional patterns of wetlands.

We first turned back the clock by examining digitized maps of archived land-cover information collected during the 1830s-1850s via surveys contracted by the Government Land Office. This information was intended to promote private ownership and settlement. Surveyors were required to measure and map the land cover they encountered along transects that became Iowa’s road system. Quilting the digitized maps provided a glimpse of the past across Iowa (Figure 1A), when the landscape was dominated by grasslands (covering 80% of the surface area) and woodlands (covering 18% of the surface area). Today, grasslands occur only on about 5% of the landscape and woodlands on about 7%, with the former replaced largely by cropland and the latter by pasture and hay fields (Figure 1B).


Figure 1. Iowa land cover in the mid-1800s (A) and as of 2001 (B, mapped with data from the National Land Cover Database, www.mrlc.gov/nlcd.php). Figure used with permission from the Journal of Soil and Water Conservation, see Gallant et al. (2011). 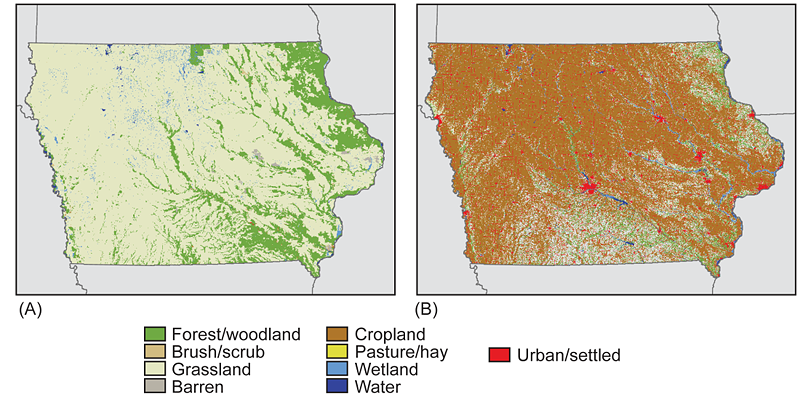 Wetlands in the 1800s were distributed in regional patterns. Moderate to high densities of wetlands occurred in the Des Moines Lobe (the southern extent of the Prairie Potholes Region), Missouri Alluvial Plain, Iowan Surface, and Mississippi Alluvial Plain ecoregions (Figure 2A, C). Wetlands were naturally less abundant elsewhere in Iowa because the hydrogeologic characteristics of the landscape did not favor wetland formation. Wetlands are distributed more evenly across Iowa today (Figure 2B) due, for example, to humans draining prairie-pothole wetlands in the Des Moines Lobe to improve land for crops, and impounding water in other ecoregions to support livestock and recreation and to control flooding. Thus, in addition to altering upland habitat, humans dramatically changed surface-water habitat for amphibians and other species across Iowa.

Patterns of soil characteristics across Iowa also provided evidence today’s wetlands are distributed differently from those of the past. We compiled a statewide map depicting soils formed under repeated seasonally wet conditions through time (hydric soils) and found wetlands would have been most common in the Des Moines Lobe, Missouri Alluvial Plain, Western Loess Hills, Iowan Surface, and Mississippi Alluvial Plain ecoregions (Figure 3) and less common in other ecoregions. 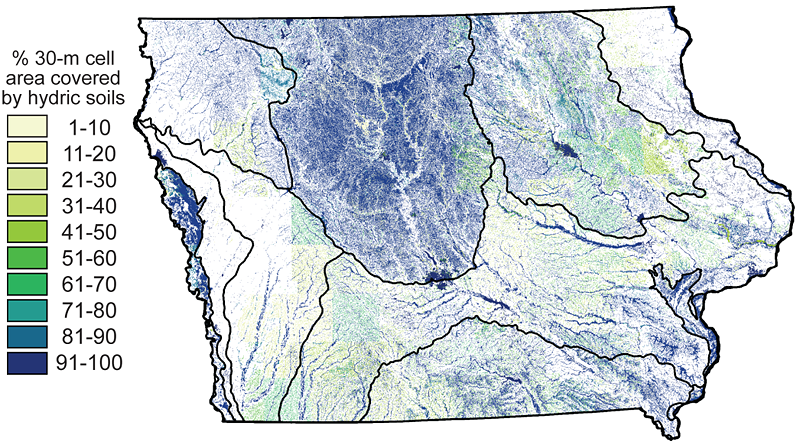 We obtained further evidence on the nature of changes in wetland distributions over time from the National Wetlands Inventory database (www.fws.gov/wetlands ). Distinguishing created wetlands from those more natural in origin (though, even these typically have been altered in various ways) showed the majority of created wetlands occurred in ecoregions that historically did not support many wetlands (Figure 4). 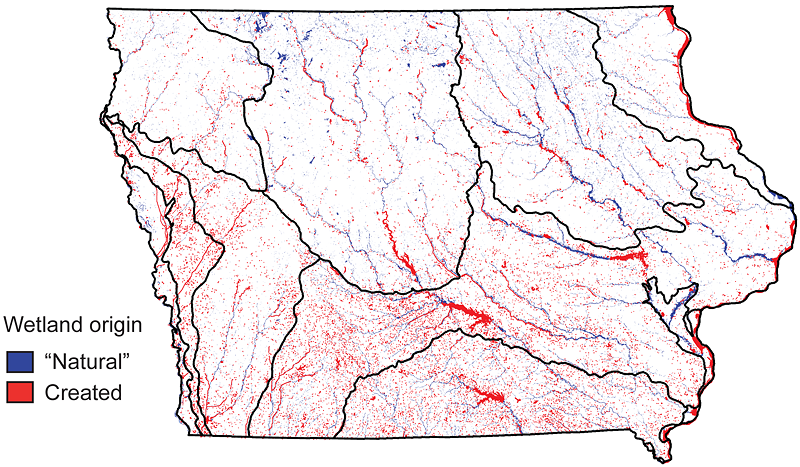 We also learned wetlands in all Iowa ecoregions are smaller today than in the past, and their size ranges now are much more similar across ecoregions.

Our results help illustrate how humans have eliminated or altered much of the native upland and wetland habitat for amphibians in Iowa during the past 150 years. The agricultural practices responsible for many of these changes continue to pose challenges to the persistence of extant amphibian populations in the form of tilling, pesticide and fertilizer applications, livestock use of wetlands, habitat fragmentation, and effects on microclimates, among others. Understanding the array of stressors impinging upon current habitat and populations in Iowa relative to historical land cover and human activity provides us essential context for helping the U.S. Department of Agriculture determine the environmental benefits of their conservation programs in the State. Given the nature and extent of habitat loss, alteration, and fragmentation in Iowa, maximizing such benefits is an important goal.