Endangered Frogs Get Helping Hands on Road to Recovery

Authors: P ac USFWS
June 12, 2013
Another hop forward in the quest to recover the endangered mountain yellow-legged frog (Rana muscosa) took place on June 12, 2013, with the release of 100 juvenile frogs to Indian Creek at the James Reserve, part of the University of California Natural Reserve System.

Watched over by a team of Federal, State, and private scientists, the mountain yellow-legged frog continues to maintain a perilous toehold in the mountains of southern California. Mountain yellow-legged frogs in southern California live in perennial streams in portions of the San Gabriel, San Bernardino, and San Jacinto Mountains. The upper elevation stream segments inhabited by the frogs are generally 1,214 to 7,546 feet above sea level.

The U.S. Fish and Wildlife Service listed the mountain yellow-legged frog in southern California as endangered in 2002. Reduced to fewer than 200 individuals by 2003, efforts to boost the species’ population have included captive breeding, reintroducing captive offspring to historic habitat, and conducting scientific research into the causes of the species’ decline.

The froglets set free at the James San Jacinto Mountains Reserve today were raised by the San Diego Zoo Institute for Conservation Research. In addition, a female adult frog raised by the Los Angeles Zoo and outfitted with a transmitter will also be released at the site.

“It is truly a thrill to see the mountain yellow-legged frog once again in Indian Creek where until very recently, the mid-1990s, natural populations existed,” said Jennifer Gee, director of James San Jacinto Mountains Reserve.

“We are optimistic that the release of froglets will be successful and help re-establish a population within Hall Canyon,” said Mike Giusti, California Department of Fish and Wildlife senior environmental scientist. “The success of this effort will be used as a model for re-establishment of frogs in other streams within the frog’s historic range.”

Factors that impact this species include chytrid fungus, a serious threat to the frogs in the U.S. and around the world; large wildfires that may bury the species’ stream habitats in ash and debris; and recreational activities that may impact frog recovery by damaging egg sacs when people swim in or cross occupied streams.

“The mountain yellow legged frog lives completely within the Angeles and San Bernardino National Forests. The Forest Service identified the need to remove tadpoles from the forest during drought conditions, which subsequently jump-started the current captive breeding population,” said Anne Poopatanapong, district biologist for San Bernardino National Forest. “We continue to administer funds to conduct recovery actions, and the Forest Service is implementing management actions, including trout removal on the North Fork San Jacinto River and Fuller Mill Creek and hazardous fuels reduction on the North Fork, to help increase suitability of habitat for this fragile amphibian.”

“We often think of endangered species as something exotic in far-away countries,” says Adam Backlin, an ecologist with the U.S. Geological Survey Western Ecological Research Center who leads the field monitoring effort on the species. “But we’ve got this one right here in southern California, and what we learn from this reintroduction and monitoring effort will teach us a lot about how to help other declining amphibian species in the U.S. and around the world.”

The frog is one of three frog or toad species native to southern California that is protected under the Endangered Species Act – the other two species are the endangered arroyo toad and the threatened California red-legged frog.

“We have cared for hundreds of mountain yellow-legged frogs and watched as they metamorphosed from tiny tadpoles into juvenile frogs, and we are excited to release them into the wild,” said Frank Santana, research coordinator for San Diego Zoo’s Institute for Conservation Research. “With a dedicated post-release monitoring plan we expect to learn a great deal of information from this reintroduction as we work towards restoring this native species to southern California mountain streams.”

In May of this year, this partnership effort to recover the mountain yellow-legged frog was recognized by the California Transportation Foundation as the Sustainable Environmental Enhancement Program/Project of the Year. The Announcement and video are available at: www.transportationfoundation.org/transportation-awards/

Efforts such as this are important to ensuring the conservation of our native amphibians which are in trouble. A nine-year effort to survey amphibians across the United States found that all species are declining, even those within wildlife refuges, national parks, and other protected areas. Researchers have not been able to identify all the potential factors causing the declines, which may include habitat loss, effects of pesticides, invasive species, and disease. A full copy of the report is available online at www.usgs.gov/newsroom

Photos and video of the release can be downloaded at from the San Diego Zoo Global website at sandiegozoo.box.com/s/nffi2p8g2wuynooh63zx 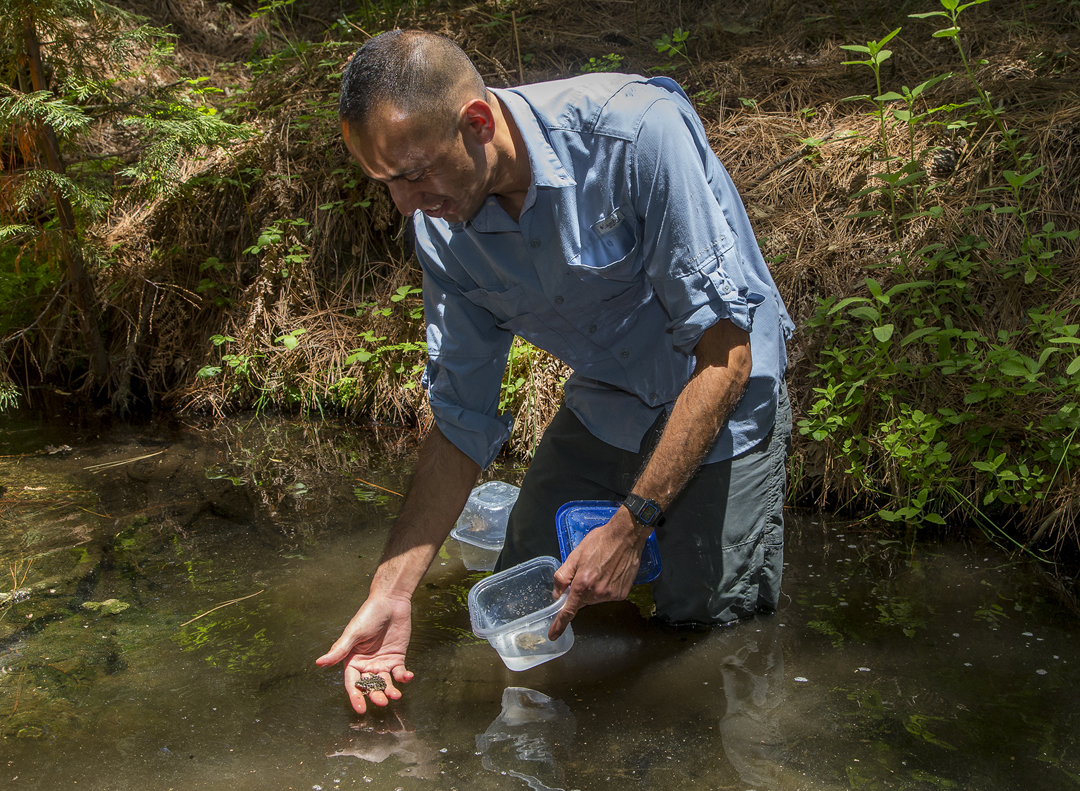 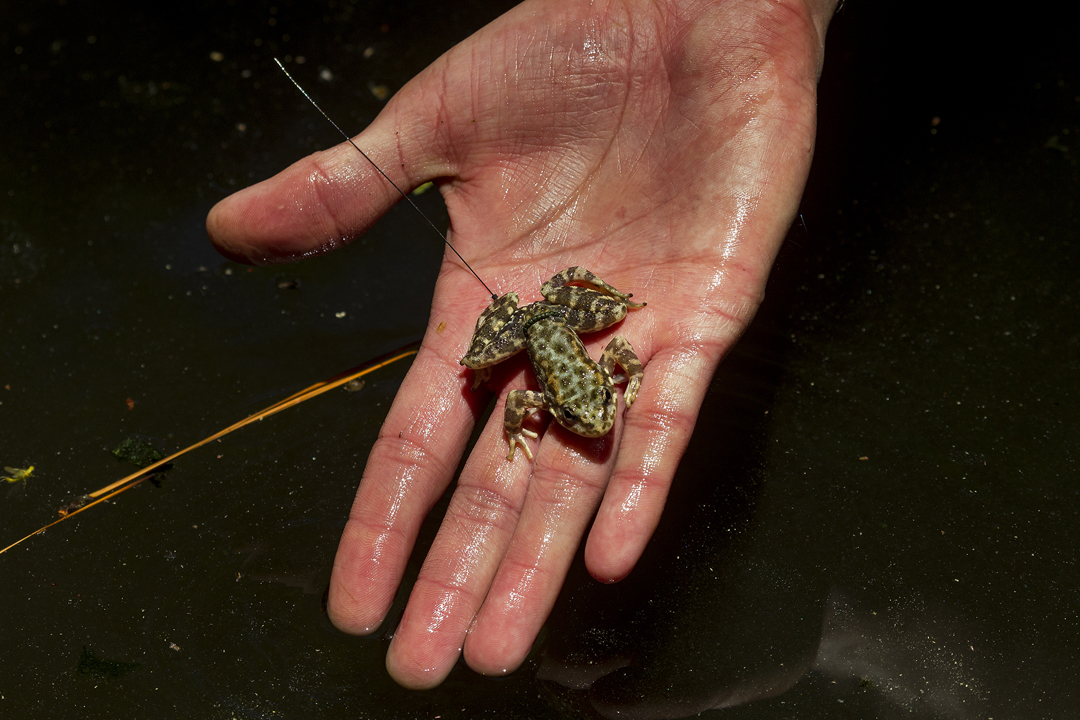 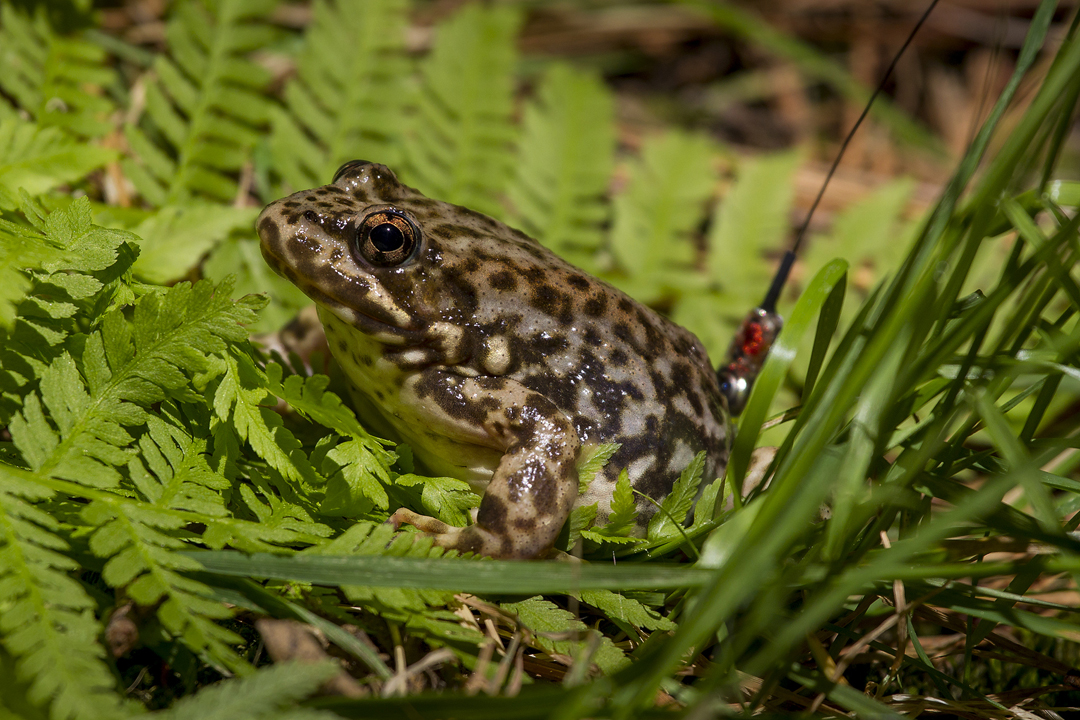