Authors: Erin Muths
October 29, 2013
ARMI scientists Evan Grant and Erin Muths, teamed with David Miller (former ARMI post doc and now professor at Pennsylvania State University) to produce the proposal that was selected for Powell Center Support for 2014-2015. The Powell Center is a USGS center that facilitates the development of new and innovative processes by which scientific understanding can be applied to significant and complex issues in a unique setting for analysis and data synthesis.

The proposal moves forward from the recently published paper describing the magnitude of amphibian declines in the U.S. (Adams et al. 2013), and will now examine the mechanisms of decline using a data driven, but model-based, approach. Though focused on North America, the insights will be applicable to other systems and will lay the foundation for a larger, perhaps international, assessment of mechanisms behind global amphibian declines.

The 15 member working group includes not only ARMI scientists and data collected over the last 10 years, but others with long-term data on amphibians including scientists from Canada, Mexico and Europe. The first working group meeting will be held in Fort Collins in January 2014. A hallmark of the Powell Center is that it is "a scientist-driven institution where leveraging existing research efforts produces powerful new insights and moves scientific understanding and its inclusion into management forward at an accelerated pace."

Amphibian populations are declining globally at unprecedented rates but statistically rigorous identification of mechanisms is lacking. Identification of reasons underlying large-scale declines is imperative to plan and implement effective conservation efforts. Most research on amphibian population decline has focused on local populations and local factors. However, the ubiquity of declines across species and landscapes suggests that causal factors at a broader scale are also important. Elucidation of the mechanisms driving population change has lagged, mainly because data have been unavailable at continental scales.

We propose to address this need by assembling data to answer questions about broad-scale drivers of amphibian decline. We will examine alterations in timing and availability of surface-water habitat (driven principally by climate change), as first order variables that control the probabilities of breeding, successful metamorphosis, and return rates of amphibians. Climate change (and its influence on shifting temperatures) is also correlated with other agents of decline such as disease and amplification of cyclical population dynamics; we consider these second-order effects.

Furthermore, data on other causal mechanisms are not available at broad-scales. We will use monitoring data (core data from USGS Amphibian Research and Monitoring Initiative, supplemented by data from collaborators in Canada, the U.S., and Mexico) and state-of-the-art statistical techniques to examine broad-scale mechanisms associated with changes in amphibian occupancy.

We will develop hypotheses for climate-induced shifts in occupancy dynamics, and test these hypotheses using a dataset representing many individual projects and regions from across North America. We will formulate the problem in hierarchical Bayesian models to examine multi-scale processes affecting patterns of species occupancy. This analysis of population trends across multiple spatial scales will facilitate the first rigorous quantitative examination of mechanisms affecting occupancy of amphibians across North America, and provide a continent-wide assessment of the contribution of climate-related factors to declines in amphibian populations. Hypotheses and methods developed through this collaborative effort will be useful in other locations experiencing amphibian declines (e.g., Australia, Europe) and our modeling approach will be useful for assessments of other taxa. 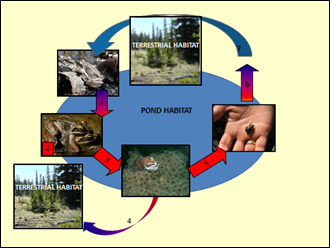