Authors: Erin Muths
May 22, 2014
The Des Moines Lobe of central Iowa has undergone drastic land-use changes over the last two centuries, with 90% of the state’s wetlands converted primarily by agricultural practices and urban development. The introduction of tile drainage to improve land for agriculture facilitated this conversion and still contributes to the productivity of this agricultural landscape. Consequently, natural wetland habitat has become rare and fragmented, affecting species with limited mobility, such as amphibians. Amphibians are an important component of these wetland systems where they provide food for other animals and eat copious amounts of insects. However, many amphibian species are at risk world-wide and some are at risk in Iowa.

While loss of habitat is the main reason behind amphibian decline, in the Des Moines Lobe, amphibians are further challenged by an environment potentially compromised by contaminants and their limited mobility exacerbates the effects of habitat fragmentation.

In response to observed ecosystem degradation in environmentally sensitive areas the USDA introduced the Conservation Reserve Enhancement Program (CREP) to target high-priority conservation issues. In the year 2001, the state of Iowa partnered with USDA and developed a CREP to strategically locate and restore wetlands on private land that receive run-off from multiple sub-surface tile drains to help reduce the export of nitrates from agricultural watersheds before the water reaches the Mississippi River and the Gulf of Mexico. Although CREP wetlands are intended primarily to reduce nitrogen to protect drinking water and reduce hypoxia in the Gulf of Mexico, they provide other ecosystem services such as providing wildlife habitat and recreational opportunities. For example, CREP wetlands and their adjoining grass buffers provide forage and cover for waterfowl and upland game. 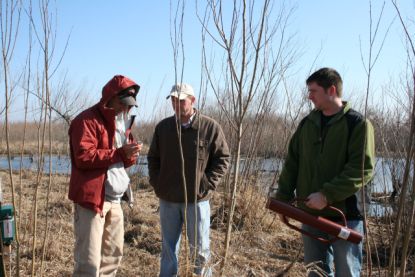